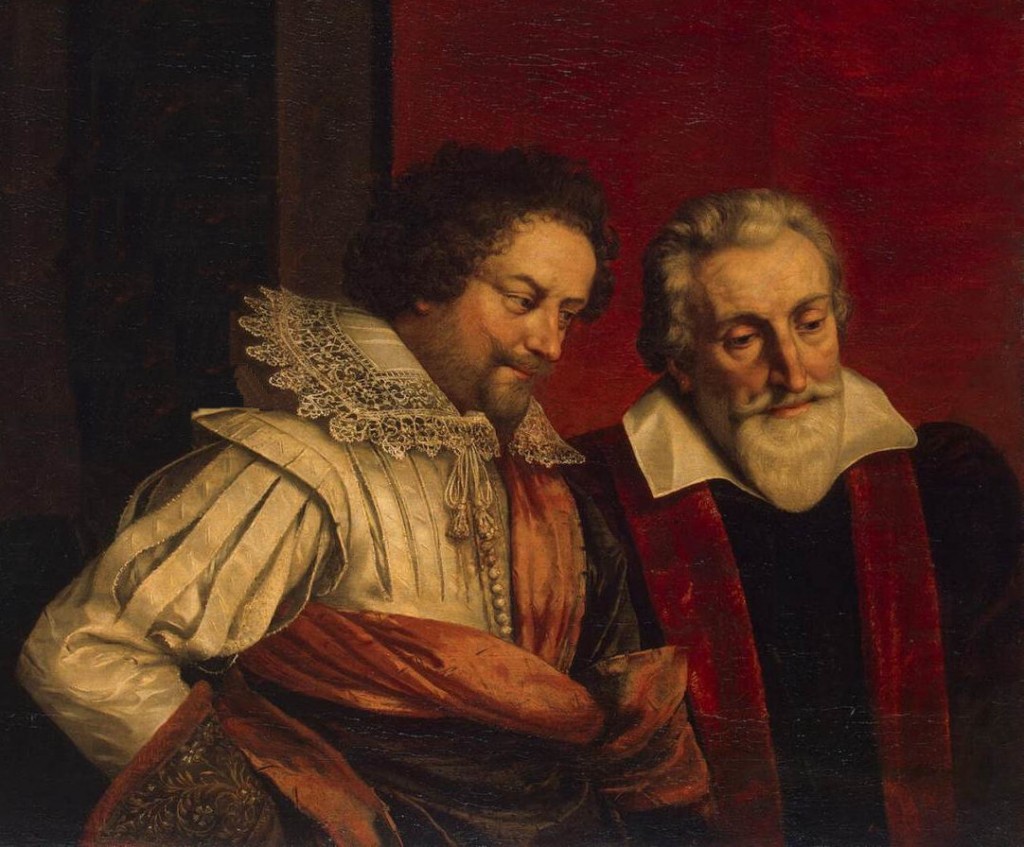 If you do not have the Adobe Reader, you can download it here

The articles are published independently and do not necessarily reflect the views of Royal Houses and of its orders of chivalry. As it is not the intention of the author of these concise essay to convince anybody of the legitimacy of the content of the books, no denials will be issued. Rather, the authors wish to explain something of the situation and set forth a few of the reasons why authors write essays to convert readers to their vision of the truth.

Our publishing may be subject to critics or applause it depends on whichever side the commentators are on. For all criticism is based on that equation: knowledge + taste ? meaningful judgment. The key word here is meaningful. People, who have strong reactions to a work, and most of us do, but don?t possess the wider erudition that can give an opinion heft, are not critics. Nor are those who have tremendous erudition but lack the taste or temperament that could give their judgment authority in the eyes of other people, people who are not experts. 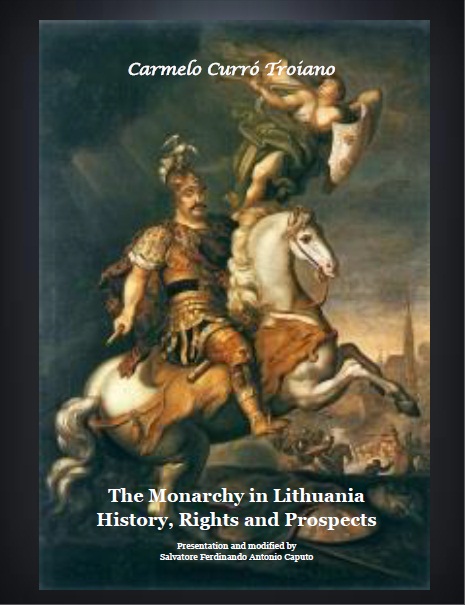 The Monarchy in Lithuania History, Rights and Prospects. History of Poland during the Jagiellonian dynasty is the period in the history of Poland that spans the late Middle Ages and early Modern Era. The first king of the new dynasty was the Grand Duke of Lithuania Jogaila, or W?adys?aw II Jagie??o as the King of Poland. He was elected a king of Poland in 1386, after becoming a Catholic Christian and marrying Jadwiga of Anjou, daughter of Louis I, who was Queen of Poland in her own right. Latin Rite Christianization of Lithuania followed. Jogaila's rivalry in Lithuania with his cousin Vytautas, opposed to Lithuania's domination by Poland, was settled in 1392 and in 1401 in the Union of Vilnius and Radom: Vytautas became the Grand Duke of Lithuania for life under Jogaila's nominal supremacy. The agreement made possible close cooperation between the two nations, necessary to succeed in the upcoming struggle with the Teutonic Order. The Union of Horod?o (1413) specified the relationship further and had granted privileges to the Roman Catholic (as opposed to Eastern Orthodox) portion of Lithuanian nobility. Poles and Lithuanians coexisted and cooperated in one of the largest political entities in Europe for the next four centuries. By Carmelo Curr? Troiano modified by  Don Salvatore Ferdinando Antonio Caputo. Download here. 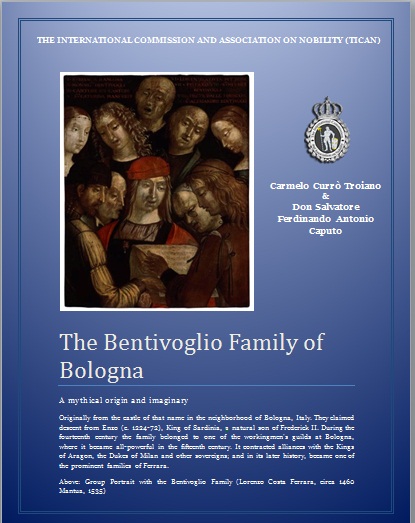 The Bentivoglio Family of Bologna. A mythical origin and imaginary. Originally from the castle of that name in the neighborhood of Bologna, Italy. They claimed descent from Enzo (c. 1224-72), King of Sardinia, a natural son of Frederick II. During the fourteenth century the family belonged to one of the workingmen's guilds at Bologna, where it became all-powerful in the fifteenth century. It contracted alliances with the Kings of Aragon, the Dukes of Milan and other sovereigns; and in its later history, became one of the prominent families of Ferrara. By Carmelo Curr? Troiano and Don Salvatore Ferdinando Antonio Caputo. Download here. 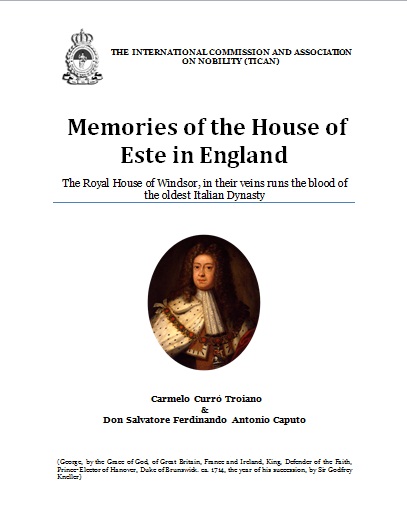 The House of Este. The Este Royal Family still reigns, and with the world's most famous monarchy. It reigns under another name, because now is called Windsor. In their veins, however, runs the blood of the oldest Italian Dynasty. Among the many states of late medieval Italy, one stands out for its unfamiliarity to an English audience and for its neglect in historical research: that of the Este family, lords (later Dukes) of the cities of Ferrara, Modena and Reggio in northern Italy.
The House of Este gave Great Britain and the United Kingdom the "Hanoverian monarchs" All (almost) European royal houses originate from the House of Hanover and thus from the House of Guelph. By Carmelo Curr? Troiano and Don Salvatore Ferdinando Antonio Caputo. Download here. 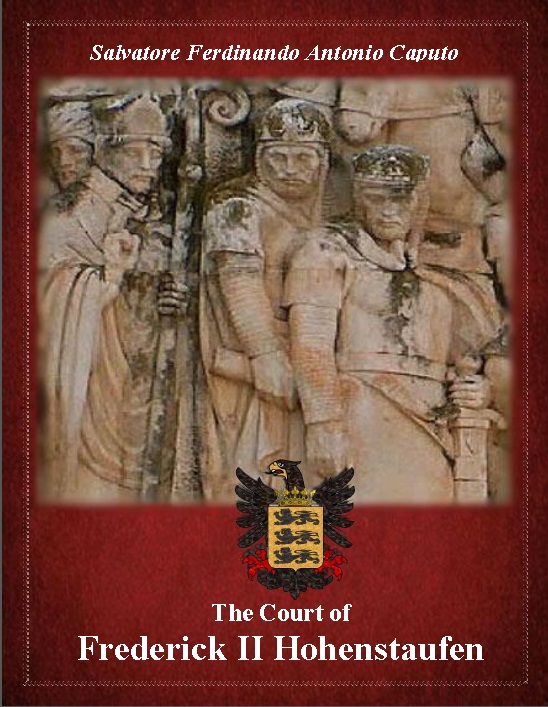 The Court of Frederick II Hohenstaufen - Frederick II was patron of the Sicilian School of poetry. His royal court in Palermo, from around 1220 to his death, saw the first use of a literary form of an Italo-Romance language, Sicilian. The poetry that emanated from the school predates the use of the Tuscan idiom as the preferred lingua franca of the Italian peninsula by at least a century. The school and its poetry were well known to Dante and his peers and had a significant influence on the literary form of what was eventually to become the modern Italian.

Frederick II was considered singular among the European Christian monarchs of the Middle Ages. This was observed even in his own time, although many of his contemporaries, because of his lifelong interest in Islam, saw in him "the Hammer of Christianity", or at the very least a dissenter from Christendom. He was known in his own time as Stupor Mundi ("wonder of the world"), and was said to speak nine languages and be literate in seven (at a time when some monarchs and nobles were not literate at all). By contemporary standards, Frederick was a ruler very much ahead of his time, being an avid patron of science and the arts. By Salvatore Ferdinando Antonio Caputo. Download here. 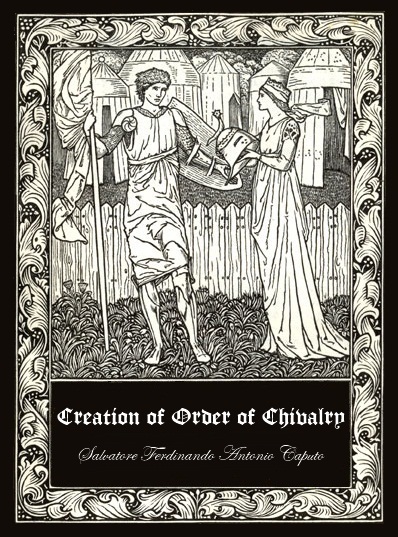 Creation of Order of Chivalry. Centuries after the American and French revolutions, a global market flourishes in false titles of nobility and self-styled orders of chivalry. This occurrence is because it provide to a general common desire to feel virtuous about oneself, a sense of well-being dependent on the drive to assert one's distinctiveness and the yearning for recognition.perceptions of how a "gentleman" ought to be. The authenticity or legitimacy of an order of chivalry and knighthood stems from its fons honorum (fount of honor). To be considered as legitimate, such an order must not only have a fons honorum, but that fons honorum must meet certain criteria in order to have the historical authority to ?make knights? as it were. By Salvatore Ferdinando Antonio Caputo. Download here. 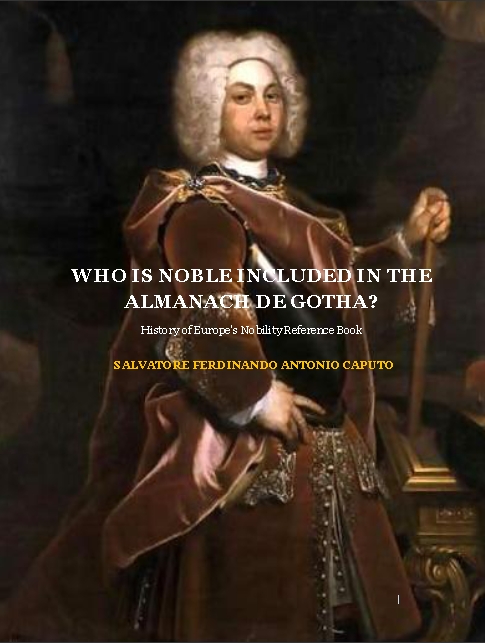 Who is noble  included in the Almanach de Gotha. - This volume examines the possibility of using genealogies of noble families in the Almanach de Gotha as a source for social sciences, to analyze the social reality of noble families, during the transition from a class structured to a civil based society. Genealogies of noble families have been published since the 19th century, but they were stopped during the Second World War. The Almanach de Gotha did not aspire to group all the ducal and princely families of Europe. In addition to many families tricked out with imaginary titles, and thus excluded, there were some authentic families, the Princes Bagration, who did not appear for the simple reason that they had refused or omitted to send in an entry. In 1989 the family of Justus Perthes re-established its right to the use of the name Almanach de Gotha. The family then sold these rights to a new company, Almanach de Gotha Limited, formed in London. Justus Perthes considers this a new work and not a continuation of the series last published by his family in 1944 with the 181st edition. By Salvatore Ferdinando Antonio Caputo. Download here. 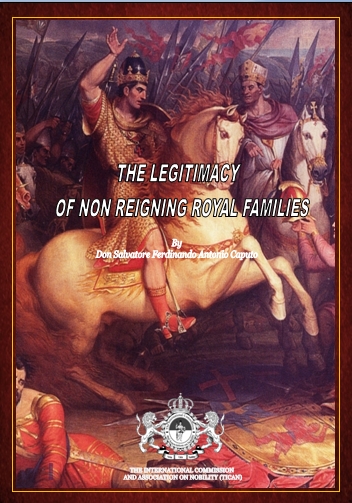 The Legitimacy of Non Reigning Royal Families - This book is the presentation of history of Europe since the downfall of Napoleon and endeavored to explain the internal development of the various nations, and their external relations of the gradual expansion of Europe and its insisted and growing pressure upon the world outside, causing the imminent collapse of many monarchies, its princes and noble families. Moreover, only the broader lines of the evolution of century can be traced in this short volume. Therefore, omitted many subjects in order to give a fuller treatment to those, in our opinion, are more important for the discussion of the legitimacy of non reigning royal families. By Salvatore Ferdinando Antonio Caputo. Download here. The Royal House of Georgia - H.R.H. Crown Prince Nuzgar Bagration-Gruzisky Dynasty - In 2006 a memorandum was signed by the House of Bagrationi, according to which Nugzar Bagrationi-Gruzinski is recognized as heir to the throne. The memorandum rests upon the legal, historical and genealogical basics; historicallegal documents of the historians of the Academy of Sciences; recognitions of the Georgian genealogical society and the assembly of the Georgian nobility; the historical-legal documents preserved in the archives of the Georgian and Russian state archives; recognitions of all Russian Monarchy Centre and the scientific board of the Moscow Memorial Museum of the Russian Imperial Name and the Peter-Paul Imperial Society. By Salvatore Ferdinando Antonio Caputo. Download here.

Kings of Rwanda: Fathers of a Nation - The Royal Rwandan Association of Knighthood and Nobility. By Stewart Addington Saint-David . Download here.
La Casa Real de Ruanda (The Royal Hose of Rwanda - Spanish)  - Royal Orders of Knighthood are explained in details. By  Marques Don Jose-Maria Monells y Galan. Download here.
Emperor Maximilian of Mexico - Though criticized as na?ve and indecisive, Maximilian is often praised by historians for his liberal reforms, his genuine desire to help the people of Mexico, his refusal to desert his loyal followers, and his personal bravery during the siege of Quer?taro. He has been highly praised even by historians who believe he had no business becoming involved in Mexican affairs. In Mexico, he and his consort are known as Maximiliano and Carlota. By Stewart Addington Saint-David. Download here.
The Equestrian Heritage of the Royal House of Rwanda - Explaination of the Royal Orders of Knighthood by Marues Jose-Maria Monells y Galan. Tanslated in english language by Stewart Addington Saint-David. Download here.
On the Nature and Validity of Honors and Titles Bestowed by the Monarchs of Contemporary Southeast Asia - In a number of the Southeast Asian monarchies of today, such as Malaysia, Brunei, and Thailand, the practice of awarding orders of knighthood and merit to deserving individuals, both native and foreign, has gained a certain measure of acceptance within the wider field of contemporary state honors. By Stewart Addington Saint-David. Download here.

On the Manorial Lordship Trade and Why ALL Lordships for Purchase Are a Scam - Over the last twenty years, the trade in manorial lordships has been discussed intermittently in the British media. These ?Lordships of the Manor? (which do no entitle the owner to call himself ?Lord? but rather, ?Mr John Smith, Lord of Wherever?) have been bought-up by a variety of wealthy businessmen and even some celebrities . By Dr Edward Dutton. Download here.