THE ROYAL HOUSE OF GEORGIA

WELCOME TO THE ROYAL HOUSE OF GEORGIA

Thank you for visiting our website. On behalf of our staff, we would like to extend our hearty welcome to you to the official website of the Canada and Central America Countries Delegation! With a sense of profound satisfaction, we are deeply delighted to be the first Ambassador of The Royal House of Georgia.

The Delegation has been organized to provide loyal service to His Royal Highness Prince Nugzar Bagration-Gruzinsky, advance the organization and structure of the nation of Georgia, provide a means for like-minded nobles to band together for increased influence, and to generally promote good governance of the Royal House.

Presently, the distinguished name of Bagrationi has over one hundred known descendants. Naturally, not every descendant has an equal claim to be the heir to the Georgian Royal Throne. The issue of rightful succession is regulated by Georgian dynastic law and supported by international law. Under these laws, His Royal Highness Prince Nugzar Bagrationi-Gruzinski is the rightful heir to the Georgian Royal Throne.

All royal privileges and regal honors are based entirely on the rights and privileges of sovereignty. Take away deposed sovereign rights (called non-territorial sovereignty in international law) and there is nothing left. All the qualities of jus imperii, jus gladii, jus majestatis, and jus honorum are gone. Obviously, after this, no right exists to operate an authentic order of chivalry, because there is no fons honorum based on anything authentic.

The mission of our Delegation is to strengthen the bonds of friendship. We will do whatever may serve that purpose and now intends to emulate all the efforts and enhancing relations. The activities of this Delegation reflect the commitment and willingness consist of bolstering a wide range of political, economic and cultural cooperation with a view to enhancing development of our relations and strengthening mutual understanding and friendship between the countries.

Thus our website will show, among others, The Royal House's true glory and wonders and it has also many useful linkages which will lead you to interesting information sources in Georgia. We sincerely hope that clicking our pages, you can get a glimpse at our activities, facts about The Royal House of Georgia and what's happening in the Royal Family of His Royal Highness Prince Nugzar Bagration-Gruzinsky.

We are convinced that as the site grows and progresses it will serve to magnify our ability to influence an ever growing number of people, not only in Canada and Central America, but also in other parts of the world.

Thank you very much again for your interest in the Royal House of Georgia. We wish to improve the quality of our website and would like to request your valuable opinions and comments regarding the contents of our pages.

The Georgian royal family of the Bagrations practiced masculine

primogeniture, legitimate sons and their descendants taking precedence over daughters and natural sons, and their descendants. But when there was no males in the royal house then female could ascend the throne, consequently the royal line was continued through the female line. When Georgian female heir-to-the-throne got married, the Georgian Dynastic Law of “Zedsidzeoba” (“Georgian Law on marriage concerning “Consort son-in-law”), was applied.

The nation of Georgia was first unified as a kingdom under the Bagrationi dynasty in the 9th to 10th century, arising from a number of predecessor states of ancient Colchis and Iberia. The kingdom of Georgia flourished during the 10th to 12th centuries, what was interrupted during of the Mongol invasions of Georgia in XIII century. Georgia rose up again in prosper at times of King Giorgi V” the magnificent" (1318-1346). He even has once again regained influence on the empire of Trabzon, this political situation remained till the last King of undivided kingdom - Giorgi VIII (1446-1466).

After of eight times invasion of the Tamerlane in Georgia, kingdom was fragmented into a number of petty kingdoms and principalities in 1490, but after the rule of the father and son, Kings Teimuraz II and Erekle II Georgia started to strengthen. Under the King Erekle II in 1763 two separated kingdoms of Kartli and Kakheti had been united. Later in 1790 under the same King Erekle was signed a treaty named treaty of Iverians (Georgians). Important is that by this treaty king of imereti, the Prince of Mengrelia and the Prince of Guria recognized King Erekle II as sovereign over them.

HRH Prince Nugzar has strong superior over representatives of all Bagrations as he descends both in the male line from the last king of the united Georgia Giorgi VIII (1446-1466) (After the whom the country was divided into parts) and also from the last king of Georgia, George XII, who died in 1800.

In 2006 a memorandum was signed by all representatives of society "House of Bagrationi", including Royal and princely branches, according to which Nugzar Bagrationi-Gruzinski is recognized as heir to the throne. The memorandum rests upon the legal, historical and genealogical basics; historical-legal documents of the historians of the Academy of Sciences; recognitions of the Georgian genealogical society and the assembly of the Georgian nobility; the historical-legal documents preserved in the archives of the Georgian and Russian state archives; recognitions of all Russian Monarchy Centre and the scientific board of the Moscow Memorial Museum of the Russian Imperial Name and the Peter-Paul Imperial Society.

Accordingly, the born child from this marriage would inherit royal rights from the line of his mother. It is important to note that by Georgian Dynastic Law a male descendent of the Royal House has priority over any females in the line of succession.

Representatives of the two families, Bagrationi-Gruzinski and Bagration Mukhranski, collaborated on a post-marriage dynastic succession agreement, and the outline of the agreement was sent to His Holiness, the Patriarch of Georgia, Ilia II (This agreement acknowledged H.R.H. Prince Nugzar’s line as the true royal line with his dynastic rights passing to the children of Prince David and H.R.H. Princess Anna). Unfortunately, Prince Davit left the country without completing the request and signing this important document.

Thus, if above mentioned marriage will fit the Dynastic Law then Prince Giorgi will surpass his older sisters in the line of succession - Were Prince Giorgi to become a dynast, he would be the heir apparent to the throne after his mother.

Heirs Apparent to the throne after her/his mother, HRH Princess Anna of Georgia:

The second marriage of H.R.H. Princess Anna of Georgia with Prince David on 8 February of 2009, Prince Giorgi (picture when he turned two year old on September 27, 2013). 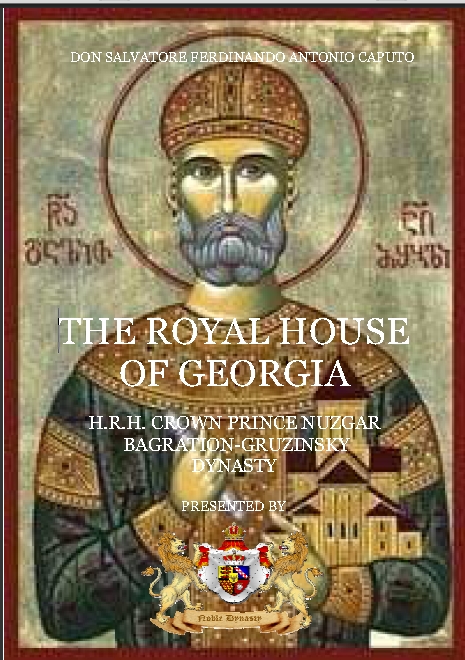