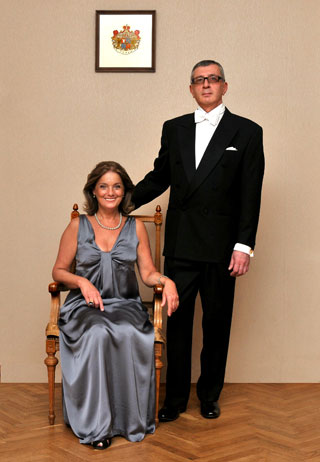 During the rule of Giorgi VIII as king of united Georgia, the Ottomans fractured the coalition between Georgia and the rest of Europe. This led to the break of the united Georgian Kingdom into three provincial kingdoms: Kakheti, Kartli, and Imereti. In 1466, King Giorgi VIII was forced to move to Kakheti, where he established the independent Kakheti kingdom. Although he continued to fight for the restored unification of the country under his crown, the prevailing politics of the region at this point in history did not permit this.

In the following centuries, many of King Giorgi VIII’s direct descendants, the representatives of the Kakhetian Royal branch, continued with this struggle for political unification. Some of them were successful, such as King Teimuraz I (1605-1648). In 1625, he united two kingdoms and became the king of the united Kartli-Kakheti Kingdom. Unfortunately, in 1648, the Iranians abolished this important unification when they invaded Georgia. King Erekle I, the grandson of King Teimuraz I, who reigned over Kartli between 1688 and 1703, tried to unite the two kingdoms again. Yet he was unsuccessful as Iran prevented restoration. Further efforts at unification were sought by the representatives of the Kakhetian Royal branch. For example, King Alexander III, who ruled in Kartli between 1735 and 1737, sought unification. So did his successor, King Teimuraz II, who became the King of Kartli in 1744. But it was his son, Erekle II of Kakheti, who finally succeeded in uniting the two kingdoms after his father died in 1762. Thereby, Erekle II became the king of the united kingdom of Kartli-Kakheti (Georgia).

The year 1790 was marked by the so-called “Treaty of the Iberians”, whereby King Erekle II was recognized as the sovereign of all Georgians: “the father of them all”. The treaty was signed by the Patriarch of Georgia, the Imeretian King Solomon II, Grigol Dadiani (Prince of Mengrelia), and Simon Gurieli (Prince of Guria). The status of King Erekle II was later inherited by his son, Giorgi XII, who was the last King of Georgia.

In 1801, the Russian Emperor tragically abolished the Georgian monarchy, but the titles and honours of the heirs to the throne were still recognized and retained by the descendants of King Erekle II and Giorgi XII. During this time, in 1801, the Georgian royal family (the ancestors of HRH Crown Prince Nugzar Bagrationi-Gruzinski) found itself exiled by the Russian Empire. No one from the other Bagration lines (the Bagrationi-Mukhranski, the Bagrationi-Davitishvili, and the Bagrationi-Babadishi lines) was exiled to Russia because these other lines were merely high nobles with no right or claim to the throne of Georgia.

In the early years of the 19th century, Imperial Russia decreed that only the sons and daughters of the Georgian King were allowed to enjoy the titles of “Georgian princes and princesses” (literally Gruzinski, which means “of Georgia”). This was meant to distinguish such princes and princesses from the other Bagrationi nobility. For this reason, only the Royal family today bears the name Bagrationi-Gruzinski. In 1833, Imperial Russia also decreed that only the grandsons of King Erekle II and King Giorgi XII must be accorded the title of "Georgian prince" (Gruzinski); this became the surname of these descendants. In 1865, the Russian Emperor Alexander II granted all the representatives of this Royal branch (the ancestors of HRH Crown Prince Nugzar Bagrationi-Gruzinski) the style of “Most Respectful”. This family, from which HRH Crown Prince Nugzar Bagrationi-Gruzinski descends, was royal and considered equal with the other royal families in Europe. Some very prominent high nobles in Russia considered the Royal family of Georgia to be merely one step below the prestige of the Russian Imperial House itself.

Crown Prince Nugzar Bagrationi-Gruzinski is the son of HRH Prince Peter Bagrationi-Gruzinski of Georgia (1920–1984), who was a prominent poet and the former Head of the Royal House of Georgia between 1939 and 1984. His grandfather, HRH Prince Alexander (1820-1865), was the son of HRH Prince Bagrat, the fourth son of King Giorgi XII of Georgia. Prince Peter’s life was full of tragedy, as he was forced to live in Soviet Russia. The Soviets knew that he was the rightful heir to the Georgian throne, and they did not want the political risk of native Georgians supporting the restoration of an independent Georgian kingdom. Despite imprisonment, Prince Peter continued to express his inner protest against the Soviet political regime through his poetry. He was part of the underground youth organization that secretly had been publishing anti-communist literature. One of his published poetry lyrics led to his arrest in 1946, and he was sentenced to the death penalty. Within this poem, the poet openly refers to his Royal descent and being the direct descendant of the great King Erekle II. Luckily, Prince Peter miraculously survived this punishment. In time, he became quite famous for his lyrics and Georgian songs. When the “Poet” Prince Peter (II) died in 1984, the headship of the Royal House of Georgia passed onto his son Crown Prince Nugzar Bagrationi-Gruzinski, who currently is the director of the Tbilisi theatre of cinema artists.

HRH Crown Prince Nugzar Bagrationi-Gruzinski is the rightful lineal successor of the last kings of united Georgia, the rightful successor of the last kings of the kingdom of Kartli-Kakheti, and the senior descendant by primogeniture in the male line of Giorgi XII. In 2006, the former head of the Imereti Royal House, HRH Princess Nino Bagration-Imeretinski (1915-2008), signed an important memorandum where she, on behalf of the Imereti royal branch, recognized the rightful claim and sovereignty of the Bagrationi-Gruzinski family over the rest of the Bagrationi lines.

Like his father, HRH Crown Prince Nugzar Bagrationi-Gruzinski also experienced hardships during the Soviet regime. For example, when his theatre company had overseas commitments, the Prince was always denied a visa by the Soviet government. The Soviets were concerned that allowing the Prince to go abroad could allow him to claim his legitimate rights. Despite this hardship, Crown Prince Nugzar Bagrationi-Gruzinski continued to stage various performances, even in challenging circumstances. Today, he is actively involved in the teaching and training of drama. Additionally, he is involved in directing various stage performances. This is in addition to his obligations as Head of the Royal House of Georgia.

On 18 December of 2007, Crown Prince Nugzar Bagrationi-Gruzinski met Kristiina Ojuland, the Vice-President of the Riigikogu (Parliament of Estonia). Ms. Ojuland paid homage to the Bagrationi dynasty and its extraordinary contribution to Georgia.

On 23 February of 2010, Crown Prince Nugzar Bagrationi-Gruzinski participated in a national conference with several high ministers of the Republic of Georgia and distinguished scientists. Within this conference, Crown Prince Nugzar Bagrationi-Gruzinski was rightfully introduced “as the successor to the Georgian throne”. In his speech, he emphasized the importance of the world community’s legal evaluation of crimes committed against the Georgian people.

On 21 May of 2010, a conference on the Circassian tragedy was held in Tbilisi. Within this, an intellectual work entitled “Pages of the History of the 19th century Caucasus” was presented. The event was organized by the “Fund of Caucasus” and attended by various members of the Georgian Parliament, important guests, and famous scholars. Crown Prince Nugzar Bagrationi-Gruzinski had a prominent role in addressing the audience with words of salutation.

With a sense of responsibility towards his country, Crown Prince Nugzar Bagrationi-Gruzinski tries to compensate for the deterioration of the country during the Soviet era and also during the troubled years of the civil war. Unfortunately, many Georgian people still live in difficult conditions. To improve the situation of such people, Crown Prince Nugzar Bagrationi-Gruzinski works with various donor organizations to implement charitable solutions for the Georgian people.

THE DIRECT ANCESTORS OF